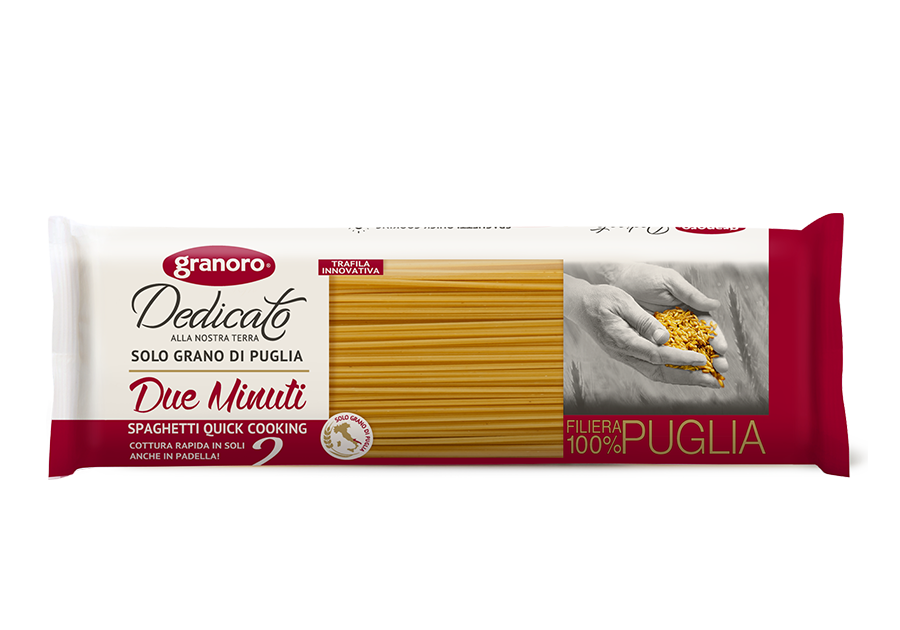 ONLY DURUM WHEAT GROWN IN PUGLIA

Store in a cool, dry place.


“Due Minuti” spaghetti was inspired by Granoro’s desire to respond to demands from the Asian market but also to transfer a culture, that of the Far East, to the Italian and international markets.

The idea of a quick-cook pasta that can be ready in just a few minutes derives from traditional Asian cuisine that uses noodles, a pasta similar to Italian spaghetti.  The difference between spaghetti and noodles is that spaghetti is made using durum wheat flour and is drawn, whilst noodles are not made with durum wheat flour and are cut directly from a sheet of pasta with a low level of humidity. Japanese and Chinese noodles are produced from a dough made with wheat flour, water and sometimes eggs; they are long and can be of various thicknesses, similar to the Italian vermicelli type of spaghetti.

The basic technique entails letting the dough soak in water to wash off the starch and increase the viscosity of the noodles, thanks to the gluten contained within. The dough is then divided by hand into fairly thin strips using a cloth with holes in or with the help of tools made of iron or wood pressed together by hand or using a pedal. Once cooked (cooking time: maximum 3 minutes), they are drained and mixed with a condiment or sauce or dried for consumption at a later date.

This product now plays an important role in the history of Asian cuisine and is gradually increasing in popularity in other countries, especially in the western world.

Granoro Dedicato Spaghetti made with a patented die

The secret of this pasta lies in the selection of high quality semolina and an innovative die, designed by Granoro to create a unique type of spaghetti.

- has the same thickness after cooking as traditional spaghetti

and can save time without compromising on taste.

Add extra value to your pasta with Granoro!

How to cook Granoro Dedicato “Due Minuti” spaghetti

Granoro “Due Minuti” spaghetti is a versatile product that can be cooked in a variety of ways.

Granoro “Due Minuti” spaghetti can be boiled in salted water, or cooked “risotto style”.

“Risotto style” cooking is a popular way of cooking pasta in restaurants as it allows the pasta to absorb the sauce as it cooks, increasing the flavour and trapping the starch.

To cook “Due Minuti” spaghetti using the “risotto style” method, the amount of sauce used must be twice as much as the amount of spaghetti to be cooked and it must be well diluted to allow the pasta to cook with the sauce. Prepare the sauce, then add the spaghetti and cook for as long as necessary (two minutes).  If the spaghetti seems to be drying out whilst cooking, just add some water.

The main difficulty with this method of cooking the pasta “risotto style” is that the pasta cooks more quickly than it does when boiled, so great care must be taken to observe the recommended cooking time and ensure it does not overcook.

What makes the pasta unique and good?